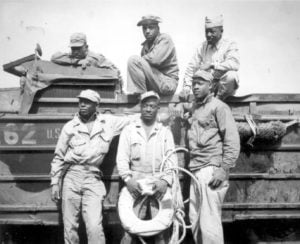 In commemoration of Black History Month, the Camp Gordon Johnston Museum will present a special exhibit to honor our country’s African-American Servicemen. This exhibit will focus on the 473rd, one of the Black Amphibious Truck Companies that served at Camp Gordon Johnston during World War II, as well as go into more depth on the segregation and Jim Crow laws that our African-American service members faced. This exhibit will open Tuesday, January 31, 2023 and be on display until Saturday, February 25. The museum is open every Tuesday through Saturday from 11 am to 5 pm and there is no charge for admission.

African Americans served in large numbers during WWII in spite of being denied full rights as American citizens. African Americans served in segregated units in both the Army and the Army Air Corps, one of the most recognizable being the Tuskegee Airmen. Many trained at Camp Gordon Johnston in transportation units like Amphibious Truck Companies, and even these support units worked close to combat and under fire. The 473rd Amphibious Truck Company trained in the use of the amphibious truck known as the DUKW, using the bay and sandy beaches in Carrabelle and all along the Forgotten Coast to practice operating, loading and unloading these truly amphibious vehicles. The 473rd Amphibious Truck Company, along with the 471st and 476th who also trained at Camp Gordon Johnston, went on to be a part of a 21 unit force from the Army that deployed with the 4th and 5th Marines for the campaign on Iwo Jima. A recent find of a full roster of the 473rd is allowing us to research this company’s men.

This exhibit will present what has been discovered to date of these men, who like many African Americans, served their country with honor in a military that was still segregated and share the types of challenges that were faced by these heroes. The Camp Gordon Johnston Museum continues their campaign to find and preserve the individual stories of the African American men that trained at the Camp and the men and women from the Florida Panhandle that served in WWII. The hope is that the families and descendants of these soldiers may help the museum to learn more these heroes and their lives. Photos and personal stories of these men are always a much welcome addition. The goal of Camp Gordon Johnston Museum is to honor all the men who trained here.

Camp Gordon Johnston WWII Museum is located in Carrabelle, directly across from Carrabelle Public Beach Park at 1873 Hwy 98 West. For more information, contact the museum at (850) 697-8575 or museum@campgordonjohnston.com. Funded in part by the Franklin County Tourist Development Council.

The Camp Gordon Johnston Association and WWII Museum was honored to dedicate our museum building on September 21, 2019  to the late Sidney A. Winchester, a Carrabelle native, U. S. Army veteran and key supporter of Camp Gordon Johnston Museum. We were joined by U.S. Congressman Neal Dunn, M.D. (FL-02) who made two very special presentations during the ceremony. Congressman Dunn presented a container of sand from Utah Beach, Normandy, France to the Camp Gordon Johnston WWII Museum and then presented an American Flag that had  flown over the U.S. Capitol Building in Washington D.C. to Sidney Winchester’s wife, Bobbye, who accepted the flag on behalf of the Museum in honor of Sidney’s service both as a paratrooper with the 82nd Airborne and as a charter member and champion of the Camp Gordon Johnston Association. The sand from Utah Beach and the flag will be on display at the Museum.  Also on this day, Camp Gordon Johnston Museum celebrated Smithsonian magazine’s 15th annual Museum Day. This national celebration honors museums that follow the example of the Smithsonian with free admission.

Click Here to see the Video of the Dedication Ceremony and Congressman Neal Dunn’s special presentations. Thanks to Mayor Brenda La Paz for this video! Click here to learn more about these events.

The museum is located at across the street from Carrabelle Beach.
1873 Highway 98 West
Carrabelle, FL 32322