You are here: Home / Learn / Exhibits

The Camp Gordon Johnston Museum houses over 3000 square feet of artifacts, photos, memorabilia and memories of the soldiers, sailors and other military as well as civilian personnel who trained and  worked here during the years 1942-1946.  Our goal is to honor them and promote the learning and preserving the history of WWII and portraying the gigantic effort that our nation and its allies poured into the war effort. The Museum is assembling the histories of the various units and their training as well as developing exhibits that remind and teach about the various aspects and events of WWII. Veterans have contributed the artifacts brought back from battles overseas, along with uniforms, mess kits, and all sorts of souvenirs, too numerous to name. The museum also preserves oral histories of veterans that returned for reunions or visited the museum.

Thee collection boasts a variety of interesting and exceptional artifacts donated over the years, many accompanied by the unique stories behand them. Some examples include:

The 28th Infantry   Division “Bloody Bucket” patch belonging to then two star general Omar Bradley, who was the commander of the division when it trained at Camp Gordon Johnston. The story of how this patch came to be in our collection is a delightful and interesting one, as the patch was gifted to Vivian (Matthews) Hess whose father was the Camp  Postmaster.

The first NAZI flag obtained by ground forces on German soil, collected by then Lt. Samuel Rhea from a German schoolhouse when the 4th Infantry crossed the Sigfried Line in September 1944.

A full spectrum of Japanese rifles, including the type 38, type 44, type 99, type 99 “last ditch” and type 99 School rifle, as well as a type II paratroop rifle. 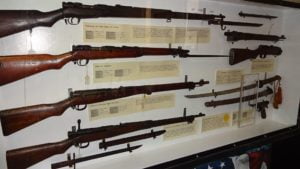 A mock–up of a Camp Gordon Johnston barracks, complete with sand floor (yes, they were sand in the beginning) with actual bunks, windows, screen door, stove, coal bin and lockers.

The Museum owns three vehicles, including a DUKW which represents us at events and parades. The DUKW is displayed at the museum for special events but is currently kept in Tallahassee.

And of course, the biggest artifact of all, the Carrabelle Beach across US Highway 98 from the museum, the setting for amphibious training featured in numerous photographs and film.

The museum is located at across the street from Carrabelle Beach.
1873 Highway 98 West
Carrabelle, FL 32322